25 years on, what’s next for Mayawati?

Kairana, Muzaffarnagar: The young lady was dark, dressed in a salwar-suit, and had been through college —a rarity for a Dalit woman 25 years ago (as was the dress itself). Khem Chand remembers the day in December the lady, a candidate in the parliamentary elections, came campaigning in the Al Darmiyan area of Kairana where he lives.

She spoke of Dalit and Muslim causes and struck a chord with people such as Chand, a worker at a brick kiln, but she lost.

She was already a member of the Bahujan Samaj Party (BSP), founded by the late Dalit leader Kanshi Ram, but the Election Commission registered her as an Independent because the party was still in its formative stages (it was formed in April 1984). 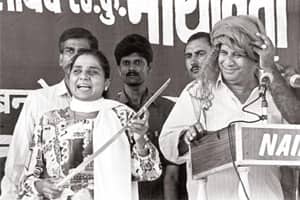 Almost 25 years on, the lady, Mayawati, now 53 years old and the chief minister of Uttar Pradesh, is still going strong. Temporarily touted as the prime ministerial candidate of an alternative coalition to those headed by the Congress and the Bharatiya Janata Party (BJP), her party contested at least 500 seats in April’s parliamentary elections but won just 21. However, the party, and Mayawati, bounced back in 7 November’s by-elections to the Uttar Pradesh assembly, where the BSP won seven of the 11 seats on offer, many in areas considered strongholds of the rival Samajwadi Party (SP).

Her appeal remains strong among Dalits.

“No one talked about Dalits then. She spoke really forcefully,” remembers Chand.

December 1984 marked Mayawati’s political debut. Parliamentary elections were held in December that year (except in two states where they were held in January 1985) in the wake of Indira Gandhi’s assassination in late October. The Mayawati of today bears little resemblance to the young lady Chand saw campaigning. Her attire has become smarter, her hair shorter, and her lavish birthday parties have become the talk of the country.

Yet, she remains the X-factor in every political party’s calculations, a variable that could exert its influence strongly, like it did in the last state assembly polls in Uttar Pradesh or fade into insignificance as it did during the last parliamentary elections. And so, everyone is wary of Mayawati. And the lady herself, of nothing and nobody.

“It’s her ability to fight which leads her to success. She is not afraid of anything,” says Ram Kumar, a Dalit activist and head of Dynamic Action Group, a Lucknow-based activist group.

Mayawati couldn’t be reached for comment despite several calls to her office.

Mayawati didn’t win her first election. The Congress swept to power on the back of a sympathy wave following Indira Gandhi’s killing. The Kairana Lok Sabha seat was won that year by Congressman Akhtar Hasan, but Mayawati came third, and polled around 40,000 votes, roughly one-sixth the number Hasan did.

Hasan, now 75 years old and retired from active politics, says that back then, “there was no election issue powerful enough as Indira (Gandhi’s assassination)”.

Her performance, “for a first timer from a party which was in its nascent stages, was quite something”, says Gaje Singh, a retired schoolteacher from Kairana and a campaigner for the party in Mayawati’s early days. “A large number of Dalits voted for her.”

And some of them were taken up enough by Mayawati’s fiery speeches and repeated assertion that she was one of them to start working for her. Chand was one such. He acquired a poster of B.R. Ambedkar, the icon of India’s Dalit movement and the man who drafted the country’s Constitution. But even he, like her other diehard supporters, didn’t foresee that Mayawati would rise as far as she has done.

In Kairana, Mayawati campaigned on bicycles and gave speeches at street corners.

In Al Darmiyan, she set up an office in three rooms of an old building and moved in with some of her supporters. “We took her on bicycles to neighbouring villages for her campaign,’’ says Gaje Singh.

“We often joked about her ways. Her appeal rested with young men and women. I don’t think anyone beyond the Dalit community even took her seriously then,” says Hasan.

For five years, Mayawati and her mentor Kanshi Ram worked with Dalits, trying to unite them into an electoral force. During the period, she fought and lost two elections. In 1989, she won her first election, a bypoll to the Lok Sabha from Bijnaur.

“She gained the most from the Dalit movement. In 1983, Kanshi Ram and Mayawati were fighting to unite Dalits. Before them, Dalits were divided in several camps. They became the hope for Dalits and they started thinking for them,” says Indra Bhushan Singh, a Lucknow-based political analyst.

By the time of Mayawati’s first electoral victory, her party had subtly changed its political platform. No longer was it merely Dalit-centric; Kanshi Ram and Mayawati started talking of the so-called other backward classes or OBCs, other minority communities that have typically existed at the fringes of the economic and electoral mainstream.

“Though Babasaheb Ambedkar wrote the Indian Constitution and gave people the right to vote, he could never win an election himself. Mayawati’s party established BSP model on Ambedkar’s theory of equality and empowerment,” says activist Ram Kumar.

And the party translated these into practice—no matter how hard it was.

“It is for the sacrifices Mayawati made that she became popular,” says Ram Kumar. She would make day trips to villages (she couldn’t spend the night in most villages because there was nowhere to stay, especially for a woman). “Her struggle was closely watched by the Dalits,” Kumar adds.

And it paid off.

In the 1989 parliamentary elections, the BSP won three Lok Sabha seats and 9.3% of the popular vote, ahead of the BJP’s 7.4% (the party, however, won 85 seats). The BSP had also expanded its presence from its base in Uttar Pradesh to Madhya Pradesh, Haryana and Punjab. In 1993, it entered into a pre-poll alliance with Mulayam Singh Yadav’s SP, consolidating the anti-upper caste opposition ahead of the assembly elections in Uttar Pradesh. The SP won 109 seats in the 425-member assembly, and the BSP won 67. “Those were the days when she used the anti-upper caste slogans most extensively. Tilak, taraju aur talwar, inko maaro joote chaar (Hurl shoes at Brahmins, traders, and Rajputs), was often uttered in her political discourse,” says Hasan.

In 1995, Mayawati became chief minister of Uttar Pradesh for five months with the support of the BJP, a national party with a pro-upper caste agenda. The alliance marked the intersection of Dalit and upper caste votes that Mayawati would later leverage to good effect.

Still, she didn’t lose sight of the fact that her original and enduring electoral base was the Dalits. In 1995, she organized a Periyar Mela in Uttar Pradesh, in honour of Periyar E.V. Ramaswamy, a Tamil leader who was Ambedkar’s alter-ego in south India.

“The essence of the symbolism used by the party is the propagation and prominence given to Dalit and social reform leaders of the past and present—from Jyotiba Phule to Ambedkar to E.V. “Periyar” Ramaswamy to Kanshi Ram by constructing murals, statues and other media. However, the scale of this has blurred the thin line between symbolism and personality cult,” says Kumar.

Some of this has come to haunt Mayawati in recent months.

But Mayawati’s finest moment was in the Uttar Pradesh polls in 2007 when she successfully wooed upper-caste Hindus, who had traditionally supported the BJP, to the BSP fold and won an absolute majority. It marked the first time a Dalit party had come to power on its own.

The perils of symbolism

Mayawati and the BSP may have bounced back from their drubbing in the recent parliamentary polls with the victory in the assembly by-elections.

However, her tendency to build parks and statues dedicated to Ambedkar, Kanshi Ram and herself has come in for criticism from various quarters. In October, the Supreme Court restrained installation of her statues at a park in Noida, a satellite of Delhi. The apex court order came rapidly in the wake of a similar order by it stopping similar statue projects in Lucknow in September. In the second case, the court initiated contempt proceedings against the Uttar Pradesh government for violation of its directions.

Mayawati herself is under investigation by the Central Bureau of Investigation (CBI) for allegedly amassing wealth disproportionate to her known sources of income. In 2008, CBI asked Mayawati how her declared assets of Rs1 crore had increased to around Rs50 crore between 2003 and 2007. Mayawati claimed she had received the money as donations from party workers.

Still, some analysts say the cases against her are politically motivated.

Mayawati isn’t a stranger to controversy.

In 2003, she was accused of corruption by the SP in 140 cases filed against her by SP chief Mulayam Singh Yadav.

She was at the centre of the so-called Taj corridor case in which CBI questioned certain permissions granted by her government for construction of a massive shopping mall and recreational centres near the Taj Mahal in Agra; the plan was later dropped as was the case. In September this year, a public interest litigation (PIL) filed against her revived the case and on 16 November, the Supreme Court rejected her plea for quashing the PIL.

Mayawati’s biggest problem, however, could be the criticism that she is beginning to ignore Dalits. “She has stopped mixing with common people. She is not aware of their problems any more. While she has become a symbol of Dalit movement, she doesn’t think about Dalits in remote villages any more,” says political analyst Indra Bhushan Singh.

That criticism finds an echo in Kairana.

“We have no BPL (below the poverty line) cards, land or jobs. How does she care?” says Chand.

“She is only building statues.”