In this book of history, you are the hero

Shubhashree Sangameswaran was a software engineer, decoding programming questions with her technical expertise and poise. Then she became a life chronicler.

One fine day in Bangalore, where pleasant weather makes up for the congestion on roads, she began to unravel human hearts. 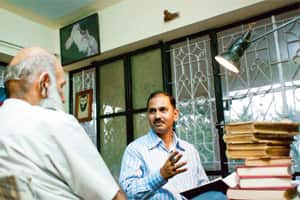 Her questions to the old lady before her were simple, yet intimate—details on her life, success and failures, hopes and dreams, and past. The interview soon turned into a series of imageries conveyed through raw emotions—the small blanket of the 80-year-old’s childhood days to the toy bicycles and the first crush, the reprimand of the math teacher, her first job, and the ups and downs of life afterwards. Every minute memory now had to be shaped into a life story with imageries turning to metaphors, like art itself.

A relentless seeker, Sangameswaran interviewed more people—in person and over the phone. She took fervent notes. She asked more questions—sometimes repetitive, always personal, but never short on warmth. The men and women, overcome with a sense of their collective past and its place in the future, choked and broke down.

Sangameswaran was recording personal histories of families, ordinary as humans can be, with little claim to grand narrative, but enough stories to tell. “Just the fact that these are individuals like you and me wanting to record their own histories makes it very interesting, especially because the exercise of historical writing has seldom recorded the living and the mundane,” she says. “People want to tell their stories because they think they are unusual.”

Sangameswaran’s list of such clients may not be long, but there are many of her ilk now in India, restless about their jobs and curious about the lives of others—corporate executives, engineers, retired professors, entrepreneurs with small businesses and freelance writers—who are recording and writing personal histories, encouraged by an explosion of individual ambitions to journal lives.

“Nearly all of them want these stories written for posterity, to be passed on as souvenir. Many think their experiences and struggles can inspire their future generations,” she says.

The engineering graduate from Bangalore Institute of Technology switched two jobs in software and advertising firms in Singapore before heading to Bangalore last year to join My Life Chronicles, a rising firm and possibly the only in India that specializes in personal histories, as a professional writer.

In the firm’s small office in Bangalore’s Koramangala, its founder Sumit Chowdhury runs a team of two personal historians and half a dozen-odd freelance writers to put together personal histories, memoirs and biographies using digital and print media. Typically, the videos use high-definition cameras and combine photo montages and music with live interviews. The books carry first-person narratives with family photos, images of letters, and audio interviews on disc.

His subjects and clients are ordinary people—middle-aged men and women and elderly parents, among others—looking to immortalize their histories in books and videos, albeit at a price with each memoir costing ₹ 20,000-50,000.

Chroniclers at his firm start by asking the clients why and how they would want to preserve their memories. They then prepare a questionnaire on various aspects of human lives, including career, home, spirituality, childhood and more. “The most common forms of life stories are biographies and autobiographies,” says Chowdhury, an engineering graduate from the National Institute of Technology in Durgapur, West Bengal, and a management graduate from the Indian Institute of Management, Bangalore (IIM-B), who quit his job at Honeywell to set up the firm. Chowdhury says there have been books dedicated to the fifth birthday of a child, pets, institutions and individuals behind them, and on parents of a woman staying alone.

What prompted this venture was his father’s untimely demise and subsequent sale of some of his personal diaries to a scrap dealer. The journal collection included inland letters, now extinct, and greeting cards exchanged between family and friends and his father during his stay in Canada and Durgapur carrying intimate details of his life and struggles. “The sale of his diaries affected me deeply because I had lost a part of his history at a time when there were no emails. I began worrying about preserving what was left of his collection and also digitize it,” remembers Chowdhury.

For many clients of personal historians, the memories attached to the subjects of such accounts continue to linger and grow. D.V.R. Seshadri, adjunct faculty at IIM-B, dedicated a book to his father, who taught at the Indian Institute of Technology, Madras (IIT-M), which has now reached almost everyone he taught and brought to him newer stories about his father, which also tell the history of the institute. “When the book was released at a family function, everyone was in tears during the reading. It was a very powerful moment,” says Seshadri.

Then, for the next 30 minutes, Seshadri patiently narrated the story of his father’s life as chronicled in the book:

About his tenure at IIT-M: “He devoted his time to the development of the four-year first-degree curriculum in chemical engineering and to the quality improvement program in engineering.” On his role as enquiry officer for the staff strike at IIT-M in 1973: “Whether liked or not, someone has to carry out such work. Let me do this…”

And, then, there are ones telling grimmer tales of struggles and of human resilience in times of crises. A management graduate requesting not to be named suffered a brain haemorrhage and subsequent paralysis in the thick of recession a couple of years ago. His wife, herself a management graduate, quit her job to help her husband recover. Now, they have commissioned a book on the experience that changed their lives.

The likes of Seshadri have grown and so, a number of freelance personal historians have also emerged.

As a woman who rarely talks about herself, it wasn’t Sudha Nair’s ambition to be a personal historian. A commerce graduate, she always dealt in textiles and fabrics for her export firm in Bangalore. Then one day, her long-time friend wanted to write a book on her decade-long single life in Bangalore and Nair came to her rescue. “You could be in a high-flying job, but when you question yourself on why you are here, such books can help you find the answer,” she says.

Anupama Vijayakumar, a 31-year-old management graduate and former banker who now works as a freelance writer, says individual histories also tell enough about the history of the times, but to write it sensibly, interviews and research have to be quite extensive. “How to approach the client and how not to offend them while asking questions are also some of the essential tools,” she says.

The trend in personal histories reflects a revolution under way in how we regard social history. History once was all about kings and queens and not about the subjects. Then came a subaltern wave when the focus shifted from ruling elite to the lowest common denominator, the common man. In the 1980s and 1990s, India’s new ruling elites became the centre of much of contemporary history, with books such as The Polyester Prince and Mahabharata in Polyester: The Making of the World’s Richest Brothers and Their Feud by Hamish McDonald recording lives of industrialists Dhirubhai Ambani and his two sons Mukesh and Anil.

Historians say personal histories are a means to move beyond dates and statistics to record history and make it more interesting. “It can be very hard on the reader to understand the complex subject whether it is economics, politics and social change without looking at the individual experience,” says historian Patrick French whose latest book India: a Portrait talks about post-independence India, with examples of personal histories of individuals such as a man who had been chained in a quarry for two years near Mysore and also telecom revolutionaries such as Sunil Bharti Mittal, who rose from middle class to become the head of Bharti Airtel Ltd, one of India’s biggest telecom companies.

French also says personal histories don’t need to be objective. “You have to leave the reader to make that decision, provided you present the facts fully and accurately,” he says.

Histories centring on the common man, once considered impossible, are now possible, thanks also to an explosion in online search tools, new accessibility of historical documents and genealogy databases, and the ease of digital cameras.

Dan Curtis, a personal historian based in Canada, has recorded about a dozen such histories as video documentaries, yet to pick up in India.

The trend, now popular in the West with the US-based Association of Personal Historians (APH) growing from about 15 members in 1995 to more than 600 worldwide, is slowly gathering momentum in India. Chowdhury’s firm is the only Indian firm registered with APH. In his two-year-old firm, six personal histories have been written and two are in the process. About 10 freelancers have also applied for a job. Yet, growth in personal histories is often hindered by the investment such projects require. “We are working on very low margins. Lot of people are interested, but they just find it expensive. A lot still needs to be done to make it sustainable,” says Chowdhury.