Not enough teachers to educate India

Roop Singh Taroke, huddled in the back rows of a damp and congested classroom, drew a blank at the mention of a geometry box and looked to his teacher for help.

At the upper primary school in Amazhir village, only 30 students out of the 180 enrolled in classes I to VIII had turned up the morning after Raksha Bandhan, along with a guruji, or guest teacher. The lanky Roop Singh Kharte, all of 20 and the lone guruji present, smiled nervously at Taroke. “I teach only Hindi,” he told the 15-year-old, before turning to a group of class II students clamouring in a corner.

Taroke, son of a farm labourer and a class VII student, had never seen an instrument box in his life although the math textbook has a chapter on geometry. Still, a student not having geometry box doesn’t seem like such a big deal. What’s more important is that there aren’t enough teachers.

One of the cornerstones of the Union government’s social welfare agenda, the Sarva Shiksha Abhiyan (SSA) aims to put every Indian child in school. On 26 February, SSA will find prominent mention in finance minister Pranab Mukherjee’s Budget, given the Manmohan Singh government’s focus on inclusiveness.

In Amazhir, the challenges involved in implementing the programme are starkly apparent. In four bare rooms, a teacher conducts two classes at a time. Two of the four teachers have been hired on a year’s contract, including Kharte.

An undergraduate student at a college in Bhopal, the state capital about 80km away, Kharte teaches at the school during vacations for Rs150 per class.

Not the kind of remuneration that makes for regular attendance. Contract teachers, also known as “para” teachers, don’t turn up when the village gets cut off by heavy rain or at festival time, say parents.

Meanwhile, the state government has no clue how many such contract teachers are in the system. Madhya Pradesh was the only state not to provide data on contract teachers when the information was sought in 2003 by the National Council for Educational Research and Training.

“Perhaps, because this is the state to have employed the maximum number of para teachers,” said Anil Sadgopal, Bhopal–based educationist and member of a government-appointed committee that drafted the recently adopted Right to Education Bill, which ensures education for all between 6 and 14 years of age.

Not surprisingly, 48 out of 374 government schools in Sehore’s Nasrullaganj block, of which Amazhir is a part, have no teachers, according to the Madhya Pradesh government website. Mint’s email and phone queries on the subject to the state’s primary education secretary Snehlata Srivastava remained unanswered.

Fifty-two schools have one teacher each, in violation of SSA norms. Only about 37 schools have more than four teachers each. “In 1997, when the government found the teaching vacancies were too many and they had scant resources, they adopted a recruitment policy which favoured para teachers,” Sadgopal said. “The number of such teachers has increased alarmingly over the last few years. It’s making the whole education system unstable.” 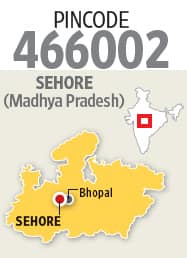 The instability that Sadgopal refers to has been caused by underqualified and untrained teachers who have no job security.

At the Shiksha Guarantee Shala (Education Guarantee School, or EGS) in Palaspani village— 30km from Amazhir—Radheshyam Barkhare is one of the para teachers at the primary school, set up by the state government to provide elementary education.

Palaspani’s vital connect to the world outside remains unchanged: a 4km-long kutcha road through the fields, the route Barkhare takes everyday from his village, Amirganj, for Rs2,000 a month. “If I were a regular teacher, I would be earning at least four times more,” he says. But then, he has only studied up to class XII.

Under the PAISA (Planning, Allocations and Expenditures, Institutions: Studies in Accountability) project run by Pratham, the largest non-governmental organization in the education sector, in collaboration with the Centre for Policy Research (CPR), a think tank in New Delhi—parents monitor teacher absenteeism, which shows that the school had to shut because no one turned up to hold classes on two days this month. The project, being run in six villages in Sehore, sensitizes parents towards making government schools accountable. “When it pours, the schools remain shut for days because none of the teachers turn up,” said Sobha Kalausia, whose son Atul is a class V student at the school.

Barkhare puts up a robust defence. “The roads sink in rainwater and there are snakes in the fields. Which route do we take?” he asks.

Salaries are irregular and incentives have dwindled to zero, he said. “These are times of financial famine for teachers. The government says it has no money to pay us. Our festivals have no colour,” Barkhare said.

School officials, however say, the system ensures lower absenteeism and better quality since the para teachers risk being fired for neglecting work.

However, various studies on para teachers including a 2006 report released jointly by the World Bank and National Institute of Educational Planning and Research, describe the system as a cost-cutting measure. Each para teacher deployment costs the state one-fifth that of a regular teacher in Madhya Pradesh. Notably, teachers’ salaries are not covered under SSA, but left to the state governments to fund.

The report also points out that contract teachers are now the norm, especially in new schools.

First introduced in Rajasthan in the 1980s as Shiksha Karmis, the concept was lapped up by various states after the World Bank adopted it in the early 1990s, beginning with Uttar Pradesh, under DPEP, now a part of SSA.

The contract teacher arrangement does serve a purpose though.

“Para teachers have come up in response to the challenge of providing universal access to primary education under different situations,” said Yamini Aiyar of the accountability initiative, CPR. “Sometimes, they help in remote and tribal areas, which do not qualify for formal primary schools within the state government norms. They also meet the teacher requirement in regular schools.”

But Sadgopal says the system is discriminatory. “It doesn’t exist in the Navodayas or the Central schools and will not exist in the 6,000 model schools being set up by the government across the country because everyone knows, to run good schools, one can’t rely on para teachers who are paid even less than contract labourers,” he says.