With barely a month to go before they begin their new academic session, the six new Indian Institutes of Technology (IITs), launched by the government this year, are struggling to fill their incoming classes.

Against the backdrop of the government wanting to implement 27% quota for other backward classes (OBCs) in higher educational institutions, the new IITs have been unable to fill seats reserved for tribal students, who, along with scheduled castes (SCs) and OBCs, now add up to more than 50% of caste-based reservations of all available seats.

While all IITs — there are seven in operation — have had this problem of finding enough students who qualify for their reserved seats, this will be the first time that these slots will actually go waste.

That is because any unfilled seats at the older IITs were then filled by students, who had failed to qualify, but had then been admitted to a year-long preparatory course.

Surendra Prasad, director of IIT Delhi, says the six existing IITs that are mentoring the new IITs had recommended the preparatory course be skipped because of lack of infrastructure.

“We are launching six new IITs, many of which do not even have campuses,” he says. “Students admitted for three of the new IITs will attend classes at the mentor IITs, which means extra load on their faculty and infrastructure. So, directors of all the IITs in a meeting decided to not admit any students for preparatory course at the new IITs.”

The result: Out of the 54 seats reserved for students belonging to the scheduled tribes (STs) category in the six new IITs, only seven, or 12%, have been filled.

In IITs at Patna, Gandhinagar and Orissa, at current fill rates, there will be no tribal students in the class that begins in August. The proposed IITs in Punjab and Rajasthan (the respective state governments have not come up with specific sites for the campus, either temporary, or permanent) have admitted one student each, whereas IIT Hyderabad has five.

The three IITs at Rajasthan, Punjab and Orissa are going to commence their classes in August on the campuses of their mentor IITs at Kanpur, Delhi and Kharagpur, respectively.

The new IITs have done better with SC students, with 89 of the 108 slots available filled.

The OBC quota is full across all the IITs, according to N.M. Bhandari, an IIT-JEE (joint entrance examination) official at IIT Roorkee, which coordinated the entrance exam this year. “Effectively, this means as many as 47 seats reserved for tribal students remain vacant across the six new IITs this year, which is more than 85% of seats available in the category,” says Bhandari.

In the seven older IITs, 152 ST students have been admitted this year against 469 seats reserved for the category.

But the problem is less acute as the vacant seats have been filled by students admitted for the year-long preparatory course, an initiative by IITs to include quota-based students who remained below the eligibility cut-offs in the entrance examination, noted Bhandari.

Some 690 seats have been filled in the SC category out of 1,050 seats, with the rest occupied by admissions from the preparatory course students.

IIT officials ascribe the current loss of seats at the institutes this year to the continuing trend of poor performance by ST students at JEE.

“We have plenty of applications from the category, but only a small percentage qualify,” says Gautam Barua, director of IIT Guwahati, which is mentoring IIT, Patna. 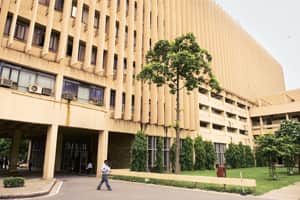 Mentor’s role: IIT Delhi will play host to the new IIT Punjab when its classes start in August as the latter doesn’t have a campus yet. Photograph: Harikrishna Katragadda / Mint

The IITs at Rajasthan, Punjab and Orissa still don’t have a physical campus, while classes at the IITs in Hyderabad, Patna and Gandhinagar, will be held from temporary locations provided by the state.

Meanwhile, at the IITs where cases of discrimination against the quota students are being hotly debated, especially after the recent case of the National Commission for Backward Castes directing IIT Delhi to review the expulsion of 12 students from the SC/ST category because they were underperforming, some say fewer numbers of quota students in the incoming class could result in even greater discrimination.

“The quota students face discrimination everywhere, starting from the canteens, laboratories and classes to the toilets. Such limited numbers in a class would make the students even more vulnerable as they are most often viewed as dumb heads who have made it to IITs because of the quotas,” says Narendra Kumar, general secretary of the SC/ST Welfare Union at IIT Delhi.

“It’s not about the numbers,” insists Prasad of IIT Delhi. “It’s a bigger issue that needs to be addressed to the core. The IITs strive to give access to quality education to as many students as possible. We need to bring the education system to a level where the students from the category can benefit from the seats reserved instead of the sheer wastage that can happen if they don’t qualify.”