Jhanjharpur, Bihar: On an apology of a road leading to this small town in Madhubani district, thick and diverse traffic—from trains to four-wheelers—chugs along on a century-old bridge over the Kamla Balan river. Lifeline: The century-old bridge facilitates the movement of 14 trains and 500 vehicles every day to and from Jhanjharpur. Ashish Gupta / Hindustan

One by one, the vehicles cross the “sorrow of north Bihar”. As the sorrowful Kamla Balan—known for its copious floods—flows precariously underneath, the 10ft-wide bridge wilts under an uneasy distinction.

In a state that has brimmed with tragedy and sorrow, it is another disaster waiting to happen.

By an unchallenged act of political wisdom exercised in the early 1970s, this has been a rail-cum-road bridge for more than 30 years, facilitating the movement of 14 trains and 500 vehicles every day to and from Jhanjharpur. It serves as the state’s sole link to its northernmost regions.

As rickshaws, trucks and cars jostle for space on the bridge, everything comes to a halt at the railway gates when trains arrive, only to trail them in close proximity.

But with last month’s epic floods washing away villages in neighbouring districts, the bridge now battles pressing concerns, raised year after year when the river swells to life-threatening proportions.

“The bridge has already outlived its life. When floods come raging, no one knows what will happen,” says Sushil Kamat, a lineman at the railway checkpoint that guards both ends of the bridge.

The Kamla Balan, marking an exception to its yearly ritual, has not flooded Jhanjharpur this year—but it flowed above the danger mark eight times in the last month. At 50m, the river starts flowing over the bridge, submerging the rail tracks.

“Road and rail transport then is closed for days. Transportation costs for us increase and we suffer huge losses,” says Ajay Tidrewal, who owns a petrol pump in Jhanjharpur.

From people trying to get to the district headquarters in Madhubani to vehicles carrying food and vegetables to local markets, work and business come to a standstill with the northernmost regions of Lokha, Phulpras and Nirmali, and even Birpur Barrage on the Nepal border, cut off from the rest of the state.

In a year when the river doesn’t bring floods, travel is easier—by a fraction. Naresh Jha, who takes the 220ft bridge—built by the British in the early 1900s primarily for rail services—every day to reach the district headquarters in Madhubani with cargo on his truck, says it is often an hour-long ordeal to get to the other side.

“One vehicle in the way, even if (it is) a motorcycle, means my truck has to wait till it crosses the bridge and one is lucky if another vehicle doesn’t follow soon after that,” he says.

Accidents are another risk many travel with, with several instances in the past when vehicles were rammed by trains owing to technical errors at rail signal posts. “There is hardly any place you can escape to if you are caught in the tracks. You either jump into the river or get crushed,” Jha says.

Since 1972, not much has changed, except that thick wooden slabs were put on the bridge to pave way for road transport, in a constituency that elected the Congress party’s Jagannath Mishra five times between 1972 and 1994—he was the state’s chief minister thrice in this period.

Earlier, people either took small boats or trains to cross the river. Even today, records at the Jhanjharpur railway station show the metre gauge track on the bridge to be a fairly busy one, with an average of 400 ticket reservations a day and about 1,300 people taking the local trains from the town to neighbouring towns.

But in Jhanjharpur, where the bridge serves as an example of adversity turned into opportunity by politicians, the sole transport link for the region continues to be more lifeline for its people than burden.

Last year, and for each alternate year before that, the Kamla Balan raged with such ferocity that its embankments were destroyed and the bridge suffered serious damage.

“When rivers carrying heavy silt are contained between embankments, it leads to a rise in the level of the riverbed. The rising bed level leads to construction of higher embankments and in many areas, rivers as a result flow above the surrounding ground level, as in the case of the Kamla Balan. Now, floods here come roaring like lions,” says Dinesh Kumar Mishra of Barh Mukti Abhiyan, an Indian Institute of Technology (IIT), Kharagpur, engineer-turned-activist, who has been trying to re-establish cultural and political ownership of rivers since 1991, when the movement took shape.

Officials at Jhanjharpur’s flood control division say six of the bridge’s 11 pillars are now clogged with the river’s silt, allowing little or no water to flow over to the other side, putting the bridge under tremendous pressure each time the river swells.

For desilting work, the division has written to the state government thrice, between 1995 and 2005, but got no response. “This is unfortunate for a place that has remained the constituency of the chief minister,” says 62-year-old Mishra.

It was more than three decades ago that the rail bridge, with approval from then railway minister Lalit Narayan Mishra—a member of Parliament from the constituency in 1972—was converted into a rail-cum-road bridge. 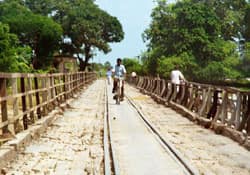 Link road: The 220ft bridge, built by the British in early 1900s, may have outlived its life, but there is still no alternative to it in sight.

Nitish now continues his father Jagannath Mishra’s legacy in Jhanjharpur, and admits that the region needs separate bridges for rail and road transport. “I have sent a proposal to the state government to this effect. The old bridge has outlived its utility and a new bridge needs to be constructed urgently.”

But even as the national highway network being built in the region envisages another road bridge on the river, Nitish says there’s no alternative to the Kamla Balan bridge site.

“This bridge is the short-cut route to many parts in the region. If this crumbles, we (will) need to build another adjacent to it. No other bridge anywhere on the river can match it,” Nitish adds.

For the people of the region, the bridge, seen by many as a construct of political opportunism, continues to symbolize at once a benefit and a bane.

Sheela Devi—who has been living on the river’s embankments for 40 years now and grows vegetables—lost a daughter to the floods years ago. But each year the floods come, she returns to the bridge to celebrate and sing songs.

“I need no boats like before. I can walk to cross over to the other side, even when water flows,” she says. “We celebrate the floods as they make the banks fertile with silt. This is our tradition.”